My father was working away and so my mother arranged for my four year old sister and I to record a message for him. It was on an early tape recorder, quite the novelty in it’s day.

Not knowing what to say I read a piece for him from the bible. However, my sister had a great deal more imagination. She made up a story, a stream of creative consciousness straight out of the mind of a child. I remember that it involved a character called Shagrabanda, as well as someone who sold hot cross buns from a cart.There were lots of sound effects, and although the story lacked cohesive structure, much like a dream, it had charm by the bucket load.

Years later my sister and I talked about the story, piecing it together like a beloved jigsaw. And even though it was fifty years ago we remembered most of it. However, whatever bible verses I had read had been completely forgotten.

My sister created her recording at a time when my grandfather would tell us bedtime stories in much the same vein. He would invent stories, on the spot, about a mythical jungle and the characters that lived there. Lions, tigers, giraffes, and even mice all played a part. 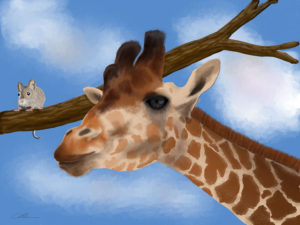 Invariably there was a disaster, and someone to save the day. The giraffe with a long neck was able to place little mice in the trees to avoid a flood. An elephant was able to put a fire out using her trunk like a hose. A mouse was able to take secret messages past the bad hyenas, since nobody noticed a little mouse.

There were sound effects in abundance, grunts, squeals, barks, whinnies, and more. In every story there was a problem, a solution, and a reward. At the end of each story the hero was given a prize, cheered by everyone, and made to feel good in some way about what they’d done. They were most definitely stories with a moral, although of course I can only see that looking back.

Do something good, or clever, or self-sacrificing, and get a reward. It’s the way the world works. – Except it’s not the way the world works. Often good deeds are punished, cleverness is taken advantage of, rewards go to the less deserving. The world isn’t fair, and loving my neighbour isn’t going to gain me any advantage, certainly not in this world, and I suspect not in the one to come either.

God loves, because God is love. It’s not contingent. You can’t earn it. You can’t change it. It’s who God is.

To be perfect is to be yourself in every situation. Which means that the way you respond to an event comes from the heart of who you are and not from some egocentric knee jerk reaction. It’s easy to hate someone who hates you, but to be loving is a unilateral act. To be loving is to decide to be you, in every situation. To be perfect is simply to be you – nothing more and nothing less.

The story I read for my dad had a point, a lesson, and made sense, but there really wasn’t anything of me in it. However, my sister’s story was a genuine reflection of who she was, a snapshot of a four year old girl being a four year old girl. Precious. The response would be as unedited as the story.

God is always God – nothing more, nothing less.

Christ, I wish I could be as perfect.