His brother was poor.

Perhaps Charles Trentworth might have reached out to help his brother had he known where he was, or even who he was. They’d been separated when they were so very young. Charles had been two, Harry three, when their mother had died. Now he only vaguely remembered his sibling; a shock of dark hair and a mischievous smile. Not much to go on, and in those days records were poor. He could be anywhere.

When Charles turned eighteen he’d tried to find his brother but the sisters of mercy had been unhelpful to say the least, and even in his morally flexible world he’d not thought about trying to to bribe a nun. Maybe one day he’d go back and have a go.

But Charles couldn’t complain. He may not have had family but he had a good life. His projects invariably made a profit, and he knew how to make the best of every situation. Growing up he’d learned how to survive, how to take calculated risks. Business was about taking risks and understanding how people ticked. You just had to make sure that the odds were stacked in your favour, and he was good at doing that.

Every week he would go to the City Hall planning office to meet with the planning clerk. He often took a gift to help smooth the way. Tickets to a concert (that he couldn’t personally attend), a coupon for a free meal at a nice restaurant (that he couldn’t use), a membership card for the golf club (because he never played). He never took cash, and never anything so extravagant that it might be thought of as a bribe. After all, he went to the office so often it was natural that he took an interest. A cynic would say he took just enough interest to smooth the way before his company’s projects came up for decision. Either way, it worked. Besides, Charles never submitted plans for anything too outrageous (which kept the planning office and the townsfolk happy), and he always paid the fees promptly. Of course he was generous, he wasn’t just rich, he was clever.

Behind the town hall was a car park, beside which was a short row of businesses and shops. One of them was vacant, and every week he walked past the guy who had taken up residence in the empty doorway. Every week the guy asked him for change. And every week he made a mental note to look into buying the building. 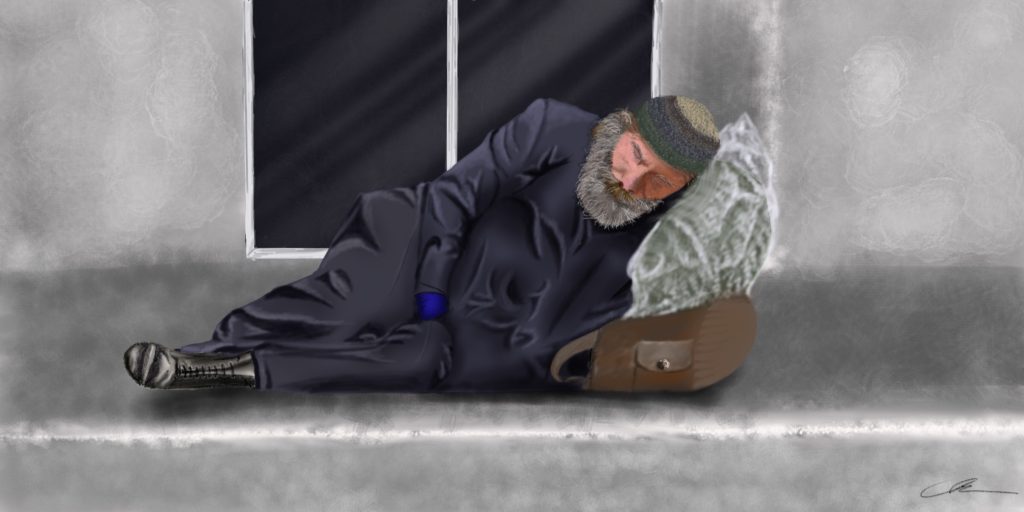 It’d been vacant almost a year. Harry Critch had been resident in the doorway for nearly six months. He’d claimed the pitch after old man Walter had frozen to death. He’d had to fight for it once or twice but it was his now. Law of the street, it was his as long as he was there.

One very ordinary day Mr. Trentworth was walking from the planning office to his car, feeling particularly happy about the project about to fly, when a sudden pain took his breathe away. He fell to his knees, and then to the floor as an invisible elephant knocked him down and then sat on his chest. It was impossible to breathe. He tried to call for help but there was no breath.

Just a few yards away, on his makeshift floor of cardboard and old carpet, Harry saw the man fall. He knew who it was, everyone knew Mr. Trentworth. He pointed at him and shouted, “Help – the man needs help”, and then almost involuntarily he lurched to his feet and staggered over to the prostrate businessman. He bent over him, as if he were hinged in the midriff or reaching to touch his toes. “Are you alright Mister?”

Through the pain Charles looked up and looked into a face almost familiar. It was like the face he saw when he shaved every morning, except this one was weather-beaten and aged. For a moment he thought some future self had come to him, perhaps some otherworldly appointed angel of mercy. But then he realised who his saviour was, and his very last thought was ,“Great, it’s the homeless guy, he’s going to take my wallet, and his breath stinks”.

“Excuse me, I’m a doctor”, and a man pushed Harry out of the way. A crowd started to gather and although Harry was used to people he didn’t like crowds. Crowds could be nasty. Harry stepped back. For a minute he stood a few feet away telling people what had happened, but nobody was listening, so he retreated back to stand in his doorway. The ambulance arrived and he watched Mr. Trentworth being placed onto a stretcher.

He stood and watched the ambulance drive away. When it had gone, and the crowd had wandered away, Harry nested back down into his space. He adopted the usual vacant look behind his cup, and hoped for enough to buy lunch, maybe some tobacco, and (if God was good) a bottle.

Lawyers went to great lengths to find his next of kin. There had been no family, no children, no will, and so they had to dig deep. Fortunately they had a fortune at their disposal and nothing else to do but search. They dug very deep. Asked questions where their authority opened doors; and found surprising answers.

Harry Critch had no idea that he’d been born Harry Trentworth; or that he was soon to become a very wealthy man.

“The King will reply, ‘Truly I tell you, whatever you did for one of the least of these brothers and sisters of mine, you did for me.’ Matthew 25:40