My father was a late starter. By the time he reached the point in his life where he was ready to be married the girl he’d wanted since he was in junior school had married another.

He married my mother on the rebound. Thirteen years and two children later his first love was single again with two children of her own. My father left us.

My mother didn’t want to be single. She wanted to love and be loved, and sadly she was in love with my father. After about a year she was introduced to a ‘good and righteous’ man of the faith. Bob was 15 years her senior but my grandfather recommended him and thought he’d be a good match. They had only known each other a few weeks when they were married. I was eleven.

I remember she asked me if I was OK with her getting married. If I could change anything in my life it would be that moment, and I would go back and say, ‘no’. But what does an eleven year old kid know about life? I said ‘yes’.

Growing up I remember that my mother had a beautiful spirit; lively and vivacious. She could light up a room with her presence. Or at least the woman I remember before she married my stepfather could. Slowly, over the years, her light went out. He would hit her, but very rarely where it would show. He didn’t hit me as often; and in fact only one occasion stands out with any clarity because he hit me so hard I wet myself and my ears didn’t stop ringing for almost three days.

When I was 16, and could leave school, I left home. At one point I asked her to come with me but she didn’t want to face the world with another failed marriage, even if she suffered because of it. We both cried when I left. 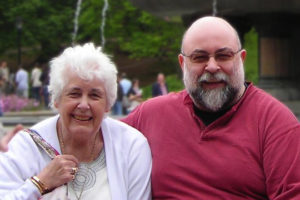 She would visit me in London, and, over a few days, her light would return. Take her somewhere nice, and after some good food and a bottle of wine she would shine brightly for a while. When I visited her in her home she was a shadow, the kitchen her only domain.

She wouldn’t leave him, even though she came close on more than one occasion. The saving grace was that he was so much older than her and had a bad heart. He would die soon and she would be free.

But it turned out the pain that was growing in her was pancreatic cancer. The last time I saw her she was sat on the side of her bed. She was so angry that her life was over and she’d spent over forty years serving him. No reward. No freedom. She wasn’t frightened of death, but the process scared her. She told me she loved me, and that she knew that I loved her. There was nothing more to say.

She turned to her faith, the one that her parents had given her. No place for a gay son in that world. I didn’t see her again, as much as I wanted to.

We cremated her body and sprinkled her ashes in the gardens of remembrance near the lighthouse in Whitley Bay. My stepfather didn’t come to the funeral. He was angry that my mother had left what little she had to her friends and kids. He’s in his nineties now.

Why did God forsake her? She was a good woman, trying to do the right thing. She toed the party line and served others all her life. I don’t give a shit what happens in the next life, I want to know why God allows it to happen here and now.

A degree in Theology and twenty five years in ministry and I still don’t know. Except, in Jesus I see that even the best of us cannot escape it. Even Jesus felt abandoned, forsaken, and alone. Perhaps it speaks of an unavoidable part of being human.

If so, it’s pretty crap.

…about three o’clock Jesus cried with a loud voice, “Eli, Eli, lema sabachthani?” that is, “My God, my God, why have you forsaken me? Matthew 27:36