This Church Christmas event wasn’t without its challenges; and Santa was having a bad day. The company that was building his house in West Virginia had filed for bankruptcy. His day job wasn’t going well. His family had sent a Christmas card that pointedly ignored his husband. His bills were mounting; and the floor on the mobile home they rented was falling through. He could but hope that the rats and snakes that had made their home under its axle would slumber on.

A photographer down town had donated her large, shop-fronted studio space for the event. A local restaurant had donated coffee, tea, and hot chocolate. Church members had baked cookies. A choir were coming in to sing. A band was coming in to play. Children would meet Santa, receive a gift, and have their picture taken with him, all free of charge. It was the annual church outreach that everyone looked forward to. It wasn’t just fun, it was magic.

But Santa looked miserable, and we couldn’t find a chair. The chair. Santa’s chair.

It had all been arranged, but then at the last minute something had gone wrong and the chair hadn’t arrived. And not any chair would do because this was Santa’s chair. It needed to be grand enough to take pride of place between the glittering Christmas tree and fireplace backdrop. It needed to be comfortable enough for Santa to sit in all day. It needed to take the weight of one Santa and any number of children.

In a panic I ran to a used furniture store nearby. 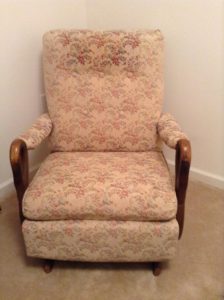 The only chair that was available was an old pink rocking chair. It wasn’t what I wanted, not by a long way, but it was strong, wide, and comfortable. It would have to do.

The store owner was in a foul mood, loathe to lend it to us, and for a moment I thought that we wouldn’t even have that. But in the end I was allowed to take it on the condition that I would sell it if I could.

As we carried the chair back to the studio I remembered that Santa had talked about moving into a new house. The thought came to me. I could solve two problems at once. I could buy the chair and give it to Santa as a house warming gift! I hoped that he liked pink.

In the meantime Santa was in the changing room praying. ‘Lord, I’ll do my best today, but it’s so difficult when it feels like life is falling apart. Please send me a sign. Just let me know that you’re here with me. Please.’

Santa was with us, but the Christmas spirit was definitely amiss.

There were already children waiting in line when we carried the chair in to the store. It looked a little out of place in the setting; but it was the best we could do. Santa came to the set. He looked at the chair, frowned, and then sat in it. His hand reached beneath the duck head handle and the colour drained from his face.

He lifted his head, an incredulous look on his face. “Who does this chair belong to?”

“Well”, I replied, a little sheepishly: “it’s yours if you like it. I thought it might be nice for your new home”.

A tear rolled down from under his gold-rimmed spectacles into his great white beard. “This is my grandmother’s chair,” he said.

I nodded. “My grandmother had one like this too”.

“No”, he said, “This is really my grandmother’s chair. She was the one that had it reupholstered and when I was young I carved my initials here under the arm”. He brought my hand to the carved duck arm and I felt the carving underneath.

Later, he gave me the backdrop to the story. He’d just come out as gay when his grandmother had passed away. The family had rejected him, and when most of his grandmother’s furniture and belongings had been auctioned off he had neither the courage to go to the auction, or the money to buy anything. Many years had gone by but he now sat in her favourite rocking chair, feeling her presence, and he knew that everything was going to be all right.

Five years on from that magical day I can tell you that Santa is now living in the house that was being built. 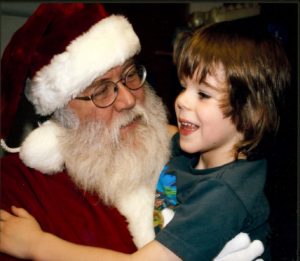 He has changed his job for something less stressful. Financially things have got easier. His family now accept his husband as one of the family. Well, mostly.

And back then on that magical day over a hundred children visited Santa. They sat on his knee in a big old pink rocking chair, and the atmosphere was genuinely full of wonder. Not just because of the spirit of Christmas but because I think Santa’s loving grandmother, never prouder of her grandson, stood by the side of that rocking chair blessing every single child.

Ask, and it will be given you; search, and you will find; knock, and the door will be opened for you. For everyone who asks receives, and everyone who searches finds, and for everyone who knocks, the door will be opened. Is there anyone among you who, if your child asks for bread, will give a stone? Or if the child asks for a fish, will give a snake? If you then, who are evil, know how to give good gifts to your children, how much more will our loving God give good things to those who ask for them! Matthew 7:7-11

Error: Your Requested widget " blog_subscription-3" is not in the widget list.